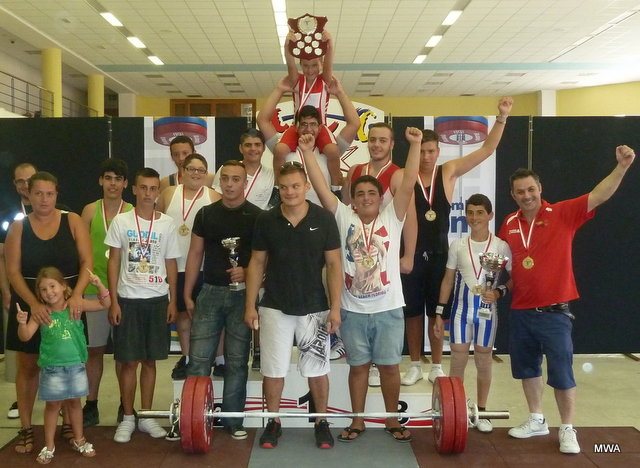 The Malta Weightlifting Association organised the annual competition for clubs at the Cottonera Sports Complex last Sunday. This event hosted a total of 30 athletes and all five of the local weightlifting clubs, including Noble Club, MCAST Naxxar, Heavy Lightweight, Starmax and Cottonera Centre. Cottonera Centre, living up to its reputation and role as the base for the sport in Malta duly succeeded in securing first place on this occasion. This meant that the overall winners of this event were Cottonera Centre at first place, followed by Starmax, Heavy Lightweights, MCAST Naxxar in fourth place Noble Club.It was both a great competition for the spectators but also one for the sport’s future on the Maltese Islands, with both Cottonera Centre and Starmax boasting a large number of youth athletes. The competition opened with the cadets category where the athletes who participated gave good performance by their attempts and good technique. In fact this was the first competition for many athletes negligible as Matthew Grech, Andy Grech and Kirstin Scerri among others. In the second competition 8 female athletes participated which also have good performance and achieved satisfactory results. This part of the competition was dominated by the club Starmax also of many athletes had the opportunity to compete for the first time in competition of this level. With all this the presence of established female athletes has not diminished. Ivana Micallef and Nicole Gatt closed their competition totaling 90kg and 107kg respectively. Nicole Gatt who has just returned from international competition had good performance will continue to help us to improve the level ultimately next year representing Malta in the Youth Olympics in Nanjing in China.In the third and last competition we saw in action some of the best weightlifters present Maltese local scene together with other athletes that have good potential. In this competition many athletes broke precedent improve their results, while also breached 7 national records. Malcolm Camilleri, 101kg total broke through 5 national records in the 50kg category in the Youth section. This competition was also very good results from athletes like Joran Farrugia, Ryan Agius, Jovan Relijc and Martin Pisani. The last athlete who dropped scene this competition was succeeded Rodmar Pulis gives top performance after gaining significant international experiences.
In this competition, Pulis was triumphant over athletes from much larger countries including the United States of America, Germany and among others. This accumulation of high level performances and intense training and focus enabled Pulis to set an impressive 241kg total and break two National records, this time in the -85kg weight category. Pulis succeeded in an inspiring 136kg Clean and Jerk, shattering the Junior National record which has stood for 15 years – much to the crowd’s delight, Rodmar powered the weight overhead and celebrated in befitting champion-like fashion. In the coming months, serious training and preparation follow the young lifter, to be joined by two other of his national teammates, Jovan Reljic and Matthew Muscat Inglott, as they will attempt to qualify for the Commonwealth Games to be held next year in Glasgow, Scotland.