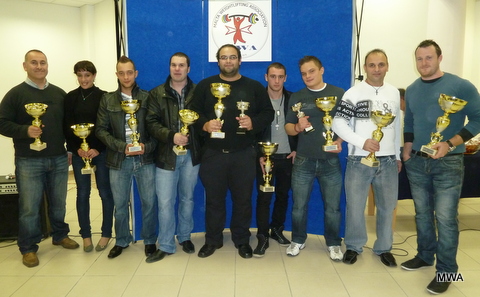 Another event held by the Weightlifting Association was the National Awards held on the 21st of December at the Cottonera Sports Complex. Trophies were presented to the winners of the National Championships held earlier this month.

Other honours awarded during this event were: The Most Improvement New Comer 2011 awarded to Francesca Mercieca and Matthew Attard, the Most Improvement Challenge Trophy won by Destiny Vella Busutill and Rodmar Pulis, Most Promising Lifter given to Jovan Relic.

Another two awards for achievements during 2011 were awarded to Nicole Gatt for breaking 41 National Records and Rodmar Pulis for breaking 44 national records. This event was sponsored by Kunsill Malti Ghall-Isport and Paparukie Catering.

In a speech delivered by the president of the association, Jesmond Caruana, gave a report of the work that has been done during the year, local competitions had risen to nine during 2011, there was also an increase in training camp participation both local and international, the amount of participating athletes has risen to forty-nine (fourteen of them being female athletes), Malta participated in twelve International events with 36 athletes and officials.

But the best accomplishment for the Association must surely be the 101 National records broken during 2011.

Caruana then went on to comment on his plans for the coming year he urged both athletes and coaches to keep working hard so that when Malta hosts the Commonwealth Championships at the beginning of 2013 these games will be a success.