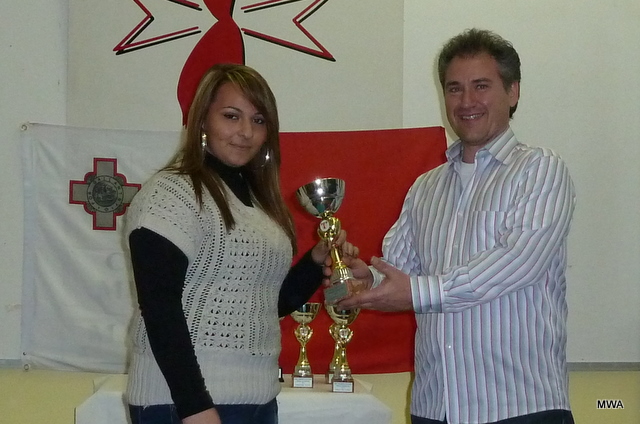 The Malta Weightlifting Association ended the 2010 with a presentation of awards. The awards where presented for the National championships and for the most improved athletes.  Trophies were presented by the General secretary Mr. Jesmond Vassallo. Many members, familes and friends attended for this presentation that was organised during a reception.

The president Mr.Jesmond Caruana during a speech gave information of work that was done during the year: 10 national competitions were organised and other international the Mediterranean cup, The MWA participated 6 times abroad with 21 athletes and 11 officials. 3 public exhibitions were organised, during the year where broken 9 national records in youths , 9 in juniors and 2 in seniors. The number of athletes that were active in competitions during the year were 24. Thanks to the referee course that was organised during the year now we have at the fist time 3 females national referees.  He also spoked about the new weightlifting centre at cottonera , the success of this website, a big thanks also to the media that where always there to gave full coverage of this sport. During the year the president attended a 10 month course in youth coaching from Semmelweis University.  This was successful and he thanked for this Olympic solidarity course to the Malta Olympic Committee.

The success for the 2010 is also noted from the Malta Sports Council, Nicole Gatt 13 year old female athlete is in the final for one of the most successful young athletes in Malta.

The President is also in the final of the best officials in Malta. He said this is a big success for our association and this was all possible with the magnificent work that the committee is doing and all the people that love weightlifting.