The spotlight was on the Malta A Selection, which was made up of RodmarPulis, Jovan Reljic, Matthew Muscat Inlgott and Charles Degorigio. In a somewhat shaky start, Degorgio failed to secure a total after some difficulty in the Clean and Jerk section of the competition. Next up was Serbian-Maltese lifter Jovan Reljic, who began his competition with some difficulty also, by missing out on his first two attempts in the Snatch lift. This left only one attempt in order to secure a total in order to proceed with the Clean and Jerk and avoid disqualification – Reljic managed to throw the bar overhead this time and held on to achieve a ‘good lift’ announcement. Following the Clean and Jerk, Reljic finished off with a 200kg total and point best due to virtue of lighter body weight, having dropped a weight class for this event.

Following Reljic’s effort, Matthew Muscat Inglott took to the stage. With a fantastic and consistent performance, Inglott achieved a ‘six out of six’, having successfully completed all three Snatch attempts and all three Clean and Jerks, totaling 269kg.

To finish off Malta’s participation, all pressure was now on Rodmar Pulis to secure a medal. Opening with a 95kg Snatch attempt, Rodmar narrowly missed having failed to stabilize the bar overhead. Determined to secure his second attempt, Rodmar powered the weight overhead in supreme fashion. In the Clean and Jerk, Pulis delivered when it counted most – a succession of three successful attempts including 120kg, 124kg, and 131kg respectively, of which the third attempt broke the national record.

With this, the Maltese team totaled 807 points, placing second for silver medal position behind Cyrpus, who achieved a combined total of 894 points, with Monaco placing third with 797 points.

The second of the two competitions was the Charles Mifsud Open, with Nicole Gatt joining Reljic, Muscat Inglott and Pulis. Also participating was Scotland, with Olympian Peter Kirkbride, and also Monaco, Switzerland, Cyprus, Wales, London and Sicily. Scotland’s great Peter Kirkbride gave a stellar performance which included a 135kg Snatch and 180kg Clean and Jerk, which helped secure a comfortable gold medal spot with a total combined points total of 1230. In silver medal position came Cyprus, with 1017 points, and taking the bronze was Switzerland, with 992 points. Malta trailed behind at 4th position with 975 points, surpassing a strong Welsh side.

The event was successfully organized and made possible by the Malta Weightlifting Association and President JesmondCaruana, with the help of KunsillMaltigħall-Isport (KMS) and Eleiko Sport as the main sponsor of the competitions. 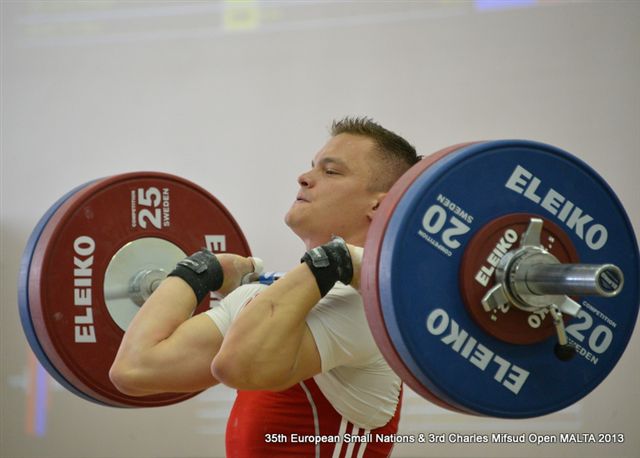