Maltese weightlifting has made history once again with Yasmin Zammit Stevens named Malta’s Sportswoman of the year for 2017.

Yasmin Zammit Stevens finished on top after 8 different sport journalists from different media voted for who they thought had the most success during 2017. During last year, Zammit Stevens was the first Maltese female weightlifter to compete at the European Championships and at the Universiade games, the first Maltese woman to win individual gold medals in an international weightlifting event, broke over 20 national records and rightfully qualified for the Commonwealth Games set to take place in Gold Coast this April.

Jesmond Caruana finished in a close 2nd place in his respective category. This was the 8th time Caruana has been voted into the finals with consistently high results every year.

First time finalist, Shelby Mangion Vassallo, was also among the 5 finalists for youth athlete of the year, celebrating a very successful year leading up to the youth Olympic Games.

The Malta Weightlifting Association is overjoyed with the tremendous success 2017 has brought.  This recognition only confirms that the tireless work by the association is paying off with more and more success year after year. 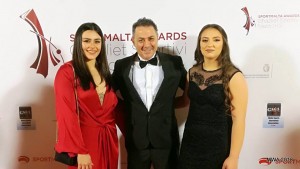